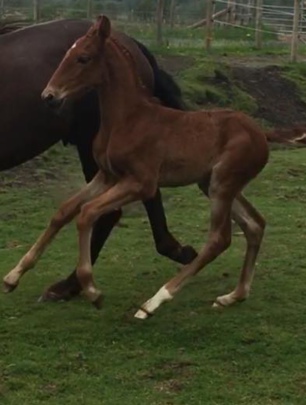 Ministra is a liver chestnut mare bred and branded by the highly regarded Soto Gil stud. She has very good bloodlines from Soto Gil,  Escalera and Yeguada de Ymas.  She has exceptional temperament and movement. This year She has given birth to a very special colt foal by the top class PRE chestnut stallion Seni Peregrino VII who has the most outstandng movement and has won many championships in Spain including world champion movement winner at SICAB in 2016,  Roco will remain at the stud as a future stallion and serious Dressage prospect. Please click to view Ministra's Bloodlines and a video of Seni Peregrino